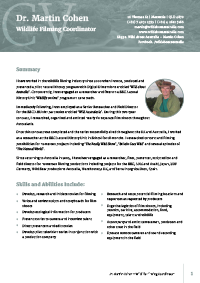 I have worked in the wildlife filming industry since 2000 when I wrote, produced and presented a pilot natural history program entitled ‘Wild about Australia’ and was engaged as a researcher and fixer on a BBC Natural History Unit ‘Wildlife on One’ program on cane toads.

Immediately following, I was employed as a Senior Researcher and Field Director for the BBC NHU six-part series entitled ‘Wild Australasia’. During this two-year contract, I researched, organised and assisted nearly 60 separate film shoots throughout Australasia.

I then moved to the UK and worked as a researcher at the BBC Natural History Unit in Bristol for 18 months.

Since returning to Australia in 2005, I have been engaged as a researcher, fixer, presenter, script editor and field director for numerous filming productions.